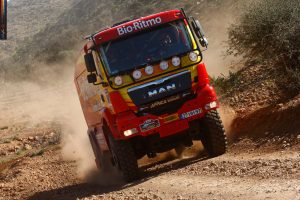 Elisabete Jacinto finished today her participation in the Rally Africa Eco Race 2017 due to a mechanical problem that arose in the engine of the MAN TGS that was impossible to solve and prevented the Portuguese to continue in the race.

The Bio-Ritmo® team had completed about 70 kilometers of today’s special, which had 370 timed kilometers, when a fire started in the engine of the MAN TGS. Elisabete Jacinto stopped before entering the dunes of the Erg Chebbi to extinguish the flames and to verify the damages. 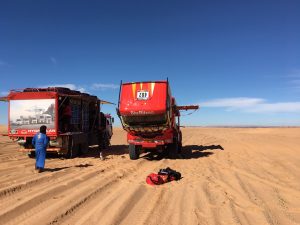 The Portuguese quickly extinguished the fire and soon realized that it would be impossible to continue the race: “We had already done about 70 kilometers of route and we were in the oued that gives access to Erg Chebbi when at a certain time Zé began to complain of a smell of burned inside the cabin. Marco realized that there was indeed something burning. At that moment, we stopped and turned off the engine. When we got out the truck we noticed that there were flames on the engine that was pouring oil. We picked up the fire extinguishers, put out the fire and found that we had a serious engine problem. We called our assistance that came to help us solve the problem. We were still hoping to be able to continue the race but then we realized that the problem was serious and that we couldn’t continue. It was a great disappointment for us all”, told Elisabete Jacinto.

Jorge Gil, manager of the Bio-Ritmo® team, considered that the team’s skill and experience were essential to minimize the damages: “what happened during today’s stage was really terrible. Fortunately all the elements were well prepared and were able to quickly extinguish the fire that started. It was the good sense and efficiency of the mechanic, Marco Cochinho that allowed that the damages in our MAN TGS weren’t greater” he said.

The Portuguese are already on their way back to Portugal and will quickly begin the truck’s recovery to start preparing for the next race of the 2017 sports calendar. The Morocco Desert Challenge, which will take place from April 16th to the 23rd, will be the next Great adventure of the Portuguese formation.