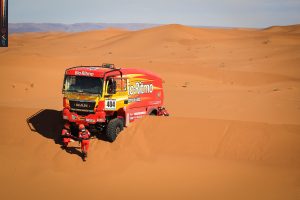 The Portuguese driver Elisabete Jacinto won today another second place in the Africa Eco Race 2019. In the special that linked La Momie to Foum Zguid, which was composed by 431,22 timed kilometers, the team Bio-Ritmo® spent 6h29m52s to complete the route of this second day of race that already included the passage of sand tracks and the crossing of dunes.

The formation composed by Elisabete Jacinto, José Marques and Marco Cochinho kept the first place in the classification of the trucks during most of the scratch, but at the crossing of a dune, the MAN TGS of the Bio-Ritmo® team got stuck and the Portuguese had to dig to remove the truck from the sand, making them waste a lot of time. With this result, the Portuguese trio maintains the second place in the T4 category and in the joint auto/truck classification comes in 9th place just behind the Czech Tomas Tomecek, who is currently the leader of the truck class. 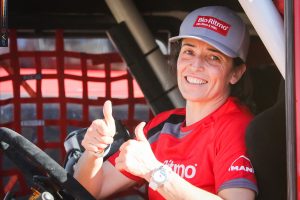 For Elisabete Jacinto the stage was tough, but the team managed to overcome the setbacks and ended the day with another positive classification: “this stage wasn’t easy because the ground was quite bad because of the stones, and it was very winding. But despite everything, we managed to make an excellent race. We only had a difficulty when at a certain point, crossing a dune, we got stuck and we had to dig what made us lose some time. However, the special went very well and, beyond this mishap, we had no other situation to report“, said the Portuguese driver.

Tomorrow will be accomplished the third stage of the Africa Eco Race that will be held between Agdal and Assa and will count with a total of 400 timed kilometers. The departure will be made directly from the camp. On this day participants will have to face mountain passes, dry valleys and numerous military stations among the relentless Moroccan tracks.