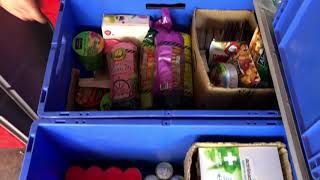 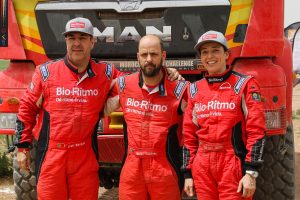 The Portuguese driver Elisabete Jacinto concluded today her participation in the 10th Morocco Desert Challenge after completing the eighth stage of this African marathon that took place between Tendrara and Oujda. The Bio-Ritmo® team made this short but demanding journey, composed by 220 timed kilometers, in 2h28m20s reaching the 12th place among the trucks. The trio formed by Elisabete Jacinto, José Marques and Marco Cochinho had to deal with a flat tire in the middle of the special which delayed their progression.

Throughout the rally, the raceof the Portuguese team was punctuated by a series of setbacks that compromised their results. However, in the stages in which they didn’t had problems to register they were able to show the reliability and consistency of their progress which allowed them to be among the top ranking of their class and recover positions day after day. So, despite all the difficulties, the trio who started the race in a modest 26th place among the trucks ends this competition in the seventh place in the T4 category.

For Elisabete Jacinto this race was very hard and difficult, as it would be expected, but she considers that the classification doesn’t reflect the commitment of the team because the pilot believes that they have the capacity to achieve better results: “today’s special was fast but it was necessary great attention 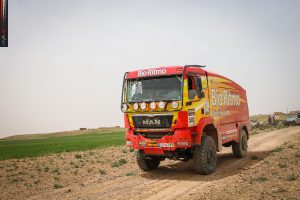 and focus because the navigation was quite demanding. We started the day well and we were able to print a good rhythm from the start. However, at one point we had a flat tire and we took some time to change it. We were doing a very good stage and we had another setback that didn’t allow us to make a good result. This rally was a mix of emotions. We had to deal with a series of setbacks that compromised our race and with all this the classification is not the one we were aiming for. I know we have the conditions to do better, but these situations are part of the races. In spite of everything I want to congratulate all the members of my team because they were awesome”, said the Portuguese driver at the end of this rally. 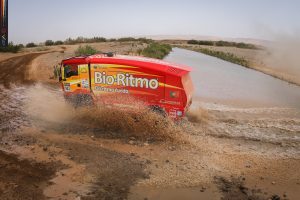 The Portuguese driver Elisabete Jacinto reached the sixth place among the trucks in the seventh and penultimate stage of the Morocco Desert Challenge, which took place today between Boudnib and Matarka, having improved 10 positions compared to yesterday’s special. In this journey, composed by 410 timed kilometers, the Portuguese spent 5h11m55s just 17 minutes more than the Czech Ales Loprais, the winner of today’s stage among the T4 and that continues to lead the overall classification of the class, and only seven cars were faster to complete the selective sector than the Bio-Ritmo® team.

The trio composed by Elisabete Jacinto, José Marques and Marco Cochinho managed to fulfill the whole special without problems to register and with a good rhythm, although they had some impediments in the progression in the stone tracks due to the lack of shock absorbers. Missing only one day until the end of this great African rally the Portuguese keep the seventh place in the classification of trucks.

Elisabete Jacinto revealed that the day was a positive: “The stage went very well. The special had

pretty good terrain and so we managed to go well. As we no longer have shock absorbers it becomes more difficult to drive quickly. But as the course was favorable we printed a good pace and we never got lost, although it was a day with a difficult navigation. We still had time to help a team that had the car rolled over. We gave a little push and managed to put the car on all four wheels. The rally is coming to an end and the truth is that I wanted to do better, but we did our best and what was possible” said the driver.

Tomorrow will be disputed, between Tendrara and Oujda, the eighth and final stage of the Morocco Desert Challenge 2018. Consisting of 220 timed kilometers, this journey, although shorter, requires full concentration and perfect navigation. Maintaining focus is the key because the tracks will be fast and hard to find. At the end of the day a great party awaits competitors at the bivouac. 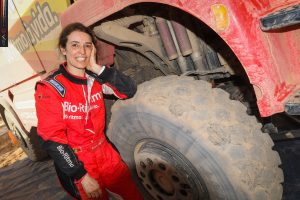 Elisabete Jacinto completed today the sixth stage of the Morocco Desert Challenge, one of the most demanding days of the entire rally where were completed 306 timed kilometers in a route that included another passage through the majestic dunes of Erg Chebbi and another one in the Erg Znaigui.

The journey held between Merzouga and Boudnib was not easy for the Bio-Ritmo® team, who, after having made 30 kilometer in the dunes, had a mechanical problem with the shock absorber support, which forced them to stop an hour to resolve the situation. Nevertheless the Portuguese finished the special in the 16th place among the T4, a result that allows them to maintain the seventh position of the overall classification of trucks.

Elisabete Jacinto, José Marques and Marco Cochinho have completed another stage at the Morocco Desert Challenge and are now two days away from completing another rally: “today’s special wasn’t easy. 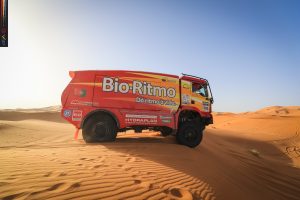 We had to run about 30km in the Erg Chebbi, wheich was a very complicated course that gave us a lot of work, but we were able to pass it without any problems. Soon after we found another section of dunes that we also surpassed well. Unfortunately we had a problem with the support of the shock absorbers and we had to stop to solve the situation which delayed us a lot. With all this we lost almost an hour. However, we managed to finish another stage and tomorrow we set off with the aim of regaining positions“, said the Portuguese driver on arrival at the bivouac.

The penultimate stage of the Morocco Desert Challenge will be held tomorrow between Boudnib and Matarka. It will be disputed 410 timed kilometers in this seventh special that follows north by the plains of Hamada and the plateau of Rekkam. After the sandy tracks of southern Morocco, in the north the riders will find deserted valleys, stone and mountain paths but the landscapes remain fabulous. 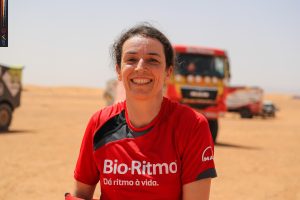 The Portuguese driver Elisabete Jacinto finished the fifth stage of the Morocco Desert Challenge, which took place today between Fezzou and Merzouga, in the eighth place among the trucks. The Bio-Ritmo® team took 5h11m01s to complete the 275 timed kilometers that composed this difficult journey that included the crossing of Erg Ouzina and Chebbi. In two days the Portuguese managed to recover nine places in the general ranking and now ascended two positions occupying the seventh position of the general classification of their class where 17 teams are currently competing.

Elisabete Jacinto, José Marques and Marco Cochinho completed the stage without registering any problems, just 31 minutes from the Czech Ales Loprais who leads the overall classification of the T4 and which was today the third fastest truck in the race.

In spite of the difficulties imposed by the selective sector, Elisabete Jacinto was able to overcome all the obstacles and once again she proves the consistency of her progress: “the stage went well but it was 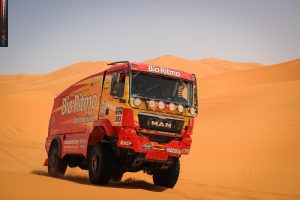 very arduous and tiring. We didn’t have great misfortunes because we did everything very calmly, however, the sand passes are always complex. In the Erg Ouzina, although the layout didn’t present great difficulties, we caught a big scare. We were leaving a very high dune and the truck made an incredible flight. We were very lucky to have stopped with all four wheels on the ground because at one point I even thought I was going to overturn. But it was the Erg Chebbi’s pass that gave us more headaches. It was particularly difficult because we entered the dunes at noon and we couldn’t see anything of the terrain. We chose to walk calmly because we didn’t want to make bad choices and fortunately all went well“, said Elisabete Jacinto.

Tomorrow will be completed the sixth stage of the Morocco Desert Challenge. It will be the last day in the dunes, but definitely one of the most complicated journeys of the whole rally. It will be held 306 kilometers to the chronometer starting with the crossing of the highest dunes of Erg Chebbi, soon followed by another section of dunes in Erg Znaigui. From here the landscape changes and until the end of the special the riders will find a mixture of sandy oueds as well as fast and technical rails.