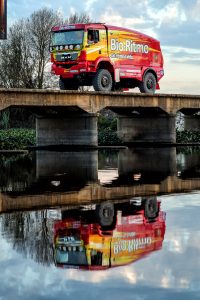 This is a vehicle which was originally planned for transporting goods; it has 18 tonnes gross weight, and it is particularly adapted to cross-country situations such as work in quarries, building and military logistics.
It was adapted to competition by German builder MAN, and presented as a prototype at the 2007 Dakar.

With permanent four-wheel driving, its engine has six cylinders in line, with 12 419cc. Its power is around 550 horsepower at 1900 rpm, and its binary, of 2500 Nm from 1200 rpm to 1800 rpm. It has electronic injection of Common-rail type. Refrigerated with water, it has an air radiator of significant size, therefore permitting good cooling of the entered air. Its gear box is of ZF brand, with eight exchanges and eight half exchanges, with the change of H by lever. Its autonomy varies according to the sort of ground, but is limited by the presence of two diesel tanks, each with a capacity for 420 litres.

It is equipped with Michelin tyres, and their pressure is controlled by a system of automatic filling commanded from inside the cabin.

When ready for a race, this truck weighs approximately ten thousand six hundred kilos, with about 60% of these concentrated at the front. This difference in weight is compensated by a good suspension system made up of parabolic springs with three sheets and a set of two shock-absorbers by wheel from APV brand. These shock-absorbers were developed by Rui Moreira, with the aim to resist to occasional very high tension, and they have shafts, tops and caps capable to withstand the sudden sideways movements which may occur at the wheels axle. Though they are not industrially produced, they include technical aspects which are innovative and the team is experimenting them. Another feature they have is that they are entirely made in Portugal. 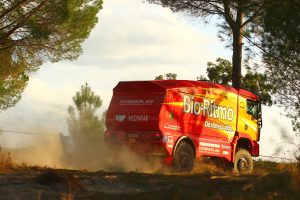 The truck has now an aspect more suited for the sport because it acquired a cargo box, also made in Portugal, by Fábrica de Carroçarias Sabino. It was planned by Tiago Girão (industrial designer) and João Sabino (mechanical engineer), who worked as a team, though each one in his speciality, bearing in mind that the main purpose was to obtain better aerodynamic results than with the original design, but considering some irreverence in relation to the image given by a conventional cargo box. It was built with materials of high mechanical performance, and the result was a lighter structure than usual. At the building level, high-tech production systems were used, of which one may mention CAD/CAM, application of high performing structural tapes and laser cut for many of the constitutive parts. Inside, it carries spare tyres, tools, all sorts of spare parts to solve any mechanical problem that may arise during a stage of the race.

The weight distribution and the high centre of gravity will make it more difficult to drive, namely over dunes, but the great engine capacity is bound to minimize that fact.