Elisabete Jacinto will display the number 402 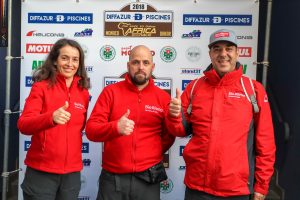 The Bio-Ritmo® team held today in Menton the technical and administrative checks of the Africa Eco Race 2018. This is the last stage that competitors have to complete before the official departure of the race, which will be held tomorrow with great excitement from the Principality of Monaco.

The Portuguese carried out the technical checks with normality and are now in countdown to the first leg of the rally that will be disputed on January 2nd already on Moroccan soil. For Elisabete Jacinto, the checks went smoothly: “it was an impeccable day without any setback. The weather was excellent which made everything more enjoyable. The truck is already in Parc Fermé which means we are ready to leave”, said the Portuguese. 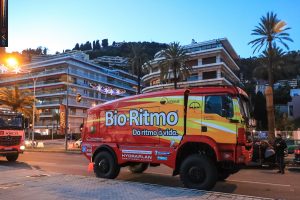 Elisabete Jacinto and the Bio-Ritmo® team will display in this Africa Race the number 402 and will face several major opponents such as De Rooy team, that is going to participate in this edition with two IVECO trucks one of which will be commanded by Gerard De Rooy and the second by the Dutchman Wuf Van Ginkel, an experienced driver who has participated for several times in the Dakar rally. Tomas Tomecek with his Tatra, with which he has already won for three times this race, and Micklos Kovacs, winner of this competition in 2010, with a Scania will also be present in the 10th edition of this rally with the ambition to win it.

The Africa Eco Race will have, this year, the largest number of truck teams having a total of 14 registered pilots in the T4 category which will face the difficult and complex routes of this African marathon. Several formations will make their debut in the Africa Race, namely the Dutch team led by the pilot Johan Elfrink, with a Mercedes, and also the Dutch Van de Laar Racing team, with a DAF, but is still expected a great competition among them.