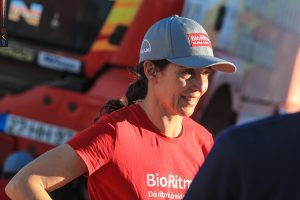 The Portuguese driver Elisabete Jacinto concluded today another stage of the Africa Race 2018, the third one that was fulfilled between Agdal and Assa, in Morocco. The day started very well for the Bio-Ritmo® team which registered a very fast speed during much of the special. Until CP2, the Portuguese were in second place among the trucks and were discussing closely the lead with the Hungarian Micklos Kovacs. But a few kilometers from the CP3, the front differential of the MAN TGS broke making difficult the progress of the Portuguese who finished the day in the 10th place of their category.

The trio, made up of Elisabete Jacinto, José Marques and Marco Cochinho, had a small difference of 40 seconds of the first place when the setback arose which ended up making it impossible for the Portuguese team to keep the speed particularly in the dune zone. The Bio-Ritmo® team completed the selective sector, which was won by the Dutch Gerard De Rooy, in 6h00m02s. The Portuguese are now in fifth place in the overall T4 standings. 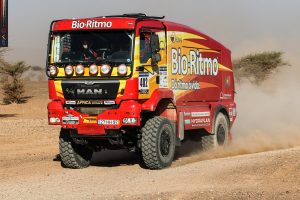 Although it is a difficult situation to solve, Elisabete Jacinto continues in the race: “we were driving very well when at one point we heard a noise. We did a few more kilometers, but the noise began to grow and we stopped to see what was happening. That’s when we realized that the front differential had broken. From that moment on we made the rest of the race with two-wheel drive, which meant we had to roll slowly and it was more difficult to finish the special. Still we managed to print a good speed until the end and now we have to try to solve the problem so that tomorrow we can be at the start”, revealed the Portuguese.

Tomorrow will be the fourth stage of the Africa Eco Race which will link Assa to Fort Chacal. It will be held 499 timed kilometers in this which will be the longest leg of the whole rally. The journey will be particularly complex in terms of navigation and will require a lot of concentration. In addition to returning to the Oued Draa the caravan will enter a plains area without much landscape and therefore without many visual points to navigate. Even before reaching the camp at Fort Chacal, the competitors will face the final challenge of crossing the Oued Hamra.