Sixth stage of the Africa Eco Race 2019 was cancelled 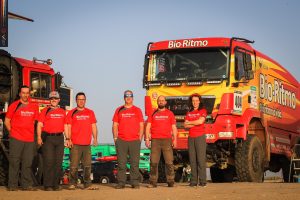 The race director of the Africa Eco Race decided to cancel today’s stage, the sixth round of the race and the first to be played in Mauritania, due to bad weather conditions that could have jeopardize the safety of the competitors.

The selective sector that today would link Dakhla, in Morocco, to Chami, in Mauritania, was composed by a special which had 176.57 of timed kilometers. However, the stage was canceled due to a strong storm that was felt in Dakhla and didn’t allow the organization’s helicopters to safely take flight. In this way, all the competitors followed to Chami by road and are now preparing to continue the race tomorrow. The team Bio-Ritmo®, having been disputed 5 stages, currently occupies the 1st position of the category truck and the 7th place of the joint classification auto / truck. 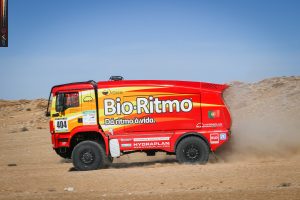 Elisabete Jacinto told what happened today: “we left Dakhla at 5:30 AM and made the entire trip towards Mauritania. We traveled about 380 km and at 10:00 AM in the morning we were at the departure point. Meanwhile, as we waited for the start of the stage, Jean-Louis Schlesser appeared that told us that it would be impossible to carry out the stage because there was a big storm in Dakhla and the helicopters couldn’t take flight and without them the race couldn’t proceed due to security issues. I confess that I was a little disappointed because the special was small and easy, and it would be the opportunity to prepare ourselves and see how the truck reacts to these tracks. But, at least, we had another day off and we will prepare for tomorrow“, explained the Portuguese.

The seventh stage of the Africa Race will be disputed tomorrow, around Chami. This will be the first of two selective sectors to be held in circuit and it will have an extension of 480 km. At the final of the stage the competitors won’t be able to count on assistance, so they will have to solve any problems in their machines by themselves. The challenge will be greater after a day that will be dominated by sand and dunes.