Elisabete Jacinto is at one stage from the victory 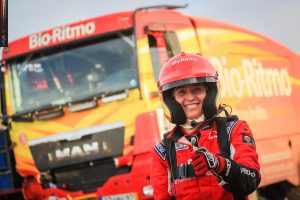 Elisabete Jacinto maintains the leadership of the trucks at the Africa Eco Race 2019 after being fulfilled today the tenth special of this great African marathon, which was completed along the 471.58 timed kilometers held between Ain Attaya and Akjout, in Mauritania. In the overall standings, the Portuguese trio climbed a position and occupy the 5th place in the joint table with the cars and is now at one stage from winning for the first time in the Africa Eco Race.

The Bio-Ritmo® team spent 7h24m33s in the long and difficult 10th stage of this competition, where the sand and the crossing of dunes were predominant, and finished in the 4th place in the category, only 15 minutes away from Tomas Tomecek the winner of today’s stage among the T4. The last special of the rally that still integrates the classification will be disputed tomorrow in Mauritania where several difficulties are expected. However, the Portuguese are motivated and confident because the second place of the trucks, that belongs to the Belgian Noel Essers, remains with a disadvantage of 2 hours for the Portuguese formation. 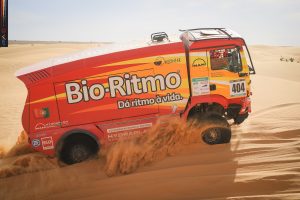 Elisabete Jacinto, despite the difficulties that the selective sector presented, achieved another good result: “today’s stage was very long and difficult because the course had many dunes that were complicated to transpose. We made all the dunes well and only lost some time in a place where the sand was very soft. We got stuck and we had to dig. Our biggest problem was when we were going down a dune and hit a very large camel grass. The truck got stuck and we had to ask the Iveco crew to help us. It was a difficult journey, but in the end, we got a good classification“ said the driver who finished the special in the 9th position of the joint classification.

It is recalled that Elisabete Jacinto has in her résumé several triumphs between the T4 in the most diverse African races (Rally of Morocco and Rally of Tunisia), but in this long off-road marathon, one of the biggest of the world, her best classification was the 2nd place of the class that she achieved in two consecutive years, 2011 and 2012.

The 11th stage of the Africa Eco Race 2019 will be accomplished tomorrow. As usual, this last Mauritanian special will be relatively short to don’t waste time and allow everyone to join the St. Louis camp at sundown. With 217.69 timed kilometers this day will be accomplished mostly on sandy trails and dunes.