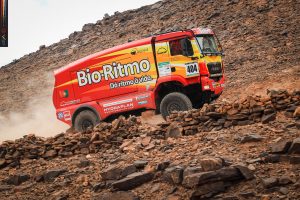 Elisabete Jacinto concluded today the fourth special of the 11th edition of the Africa Eco Race in which a flat tire in the MAN TGS delayed the pilot who ended up giving in the first place among the trucks, a position that she reached in yesterday’s step. Despite the setback, the portuguese remains in the fight for the leadership of the category having a small difference of 7m24s to the current leader, the Czech Tomas Tomeck. The Bio-Ritmo® team completed the fourth day of this African marathon, composed of a difficult and long route of 492.75 kilometers held between Oued Draa and Fort Chacal in 5h48m15s and was ranked 3rd among the trucks.

Elisabete Jacinto, José Marques and Marco Cochinho were able to accomplish the selective sector without any difficulties, and only one flat tire blocked their progress: “the special was beautiful and very interesting in terms of driving. But it was not easy to fulfil because the courses were winding and had a lot of stone. So, we had to move carefully so we didn’t have any problems. Despite this, we were able to ride well at a good pace, but the bad tracks degraded the tires a lot and at one point we had a flat tire and we had to stop some time to change it which delayed us a lot. Anyway, we have had some happy days because the stages have been going well and we are pleased with the good results“ revealed the Portuguese who was 12th in the auto / truck classification. 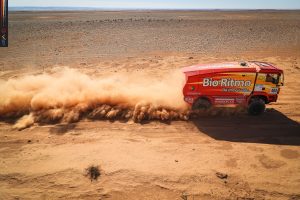 The competition for the T4 has been very lively in which the Portuguese trio has occupied a prominent position by enthusiastically discussing the first place in the category against the Belgian Igor Bouwens, the winner of the day among the trucks, and the Czech Tomas Tomecek. Having been disputed four stages of the Africa Race 2019 the Portuguese now assume the 2nd place of the overall classification of the T4 and the 8th position of the joint classification auto / truck.

Tomorrow will be accomplished the fifth stage of the Africa Eco Race that is held between Fort Chacal and Dakhla and will have a total of 638 kilometers. This will be the last stage completed on Moroccan soil and has a very fast selective sector but complex from the point of view of navigation. It will be a very pleasant way to conclude this first week of race and get to the well-deserved rest day that will be fulfilled along the Atlantic Ocean in Dakhla.