The driver Elisabete Jacinto won today the fifth stage of the Africa Race 2019, in the truck competition, and regained the leadership of her category. The Bio-Ritmo® team held the 419.37-kilometer special stage, fulfilled between Fort Chacal and Wad Assag, in 3h55m56s finishing the selective sector with a 14m20 lead for the second truck, the Belgian Igor Bouwens, and spending only 10m06s more than the winner of the day of the auto / truck classification, the Russian Sergey Kuprianov.

The special didn’t start well for the Portuguese who, at the start of the course, had to stop because of a mechanical problem. But they quickly solved the situation and managed to beat all their opponents and finished the stage in the 7th place overall. Elisabete Jacinto is again the leader of the T4 class leaving the second classified of the category, the Belgian Noel Essers, 1h40m away. The Portuguese ascended to the 7th position of the overall classification with cars. 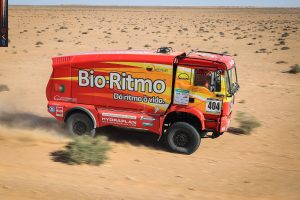 Elisabete Jacinto, José Marques and Marco Cochinho performed once again a great stage and proceed to Mauritania at the top of the race: “Today the day didn’t start well because we had to stop about two kilometers after we started the special. We had a mechanical problem, and we stood there for about eight minutes to solve the problem. But, once we resolved the situation, we have done our best to recover positions. This stage was complicated in terms of navigation because it was very wide, had few references on the horizon to guide us, there were several parallel tracks and so it was very easy to make mistakes. But, Zé didn’t miss a single note and we were able to always follow the right track with a good pace and, although we started poorly, we finished well“, said the Portuguese driver.

Tomorrow will be the rest day of the Africa Eco Race which is fulfilled, once again, in Dakhla. For the fifth consecutive year, the camp will be installed on the coast of the Atlantic Ocean where the sun and warm temperatures will allow a true day of rest for both pilots and machines that will thus recover the energies for the second week of race which will be fulfilled mostly in Mauritania.