Elisabete Jacinto won today the seventh stage among the T4 class of the Africa Eco Race 2019, the first fulfilled in Mauritania, by being the fastest among the trucks to carry out the selective sector composed of 480.98 timed kilometers, held between Chami and Gare du Nord. The Bio-Ritmo® team spent 4h54m39s finishing the course of the day gaining another 8m30s to Belgian Igor Bouwens, who finished the race in second place in the category. With this result the Portuguese maintain the leadership among the trucks.

Elisabete Jacinto, José Marques and Marco Cochinho completed the selective sector in most of the time in front of their class and finished the special in the 5th place of the table auto/truck, which allows them to rise to 6th of the joint general classification. After seven stages, behind the Portuguese team, in the second place of the trucks, follows the MAN of the Belgian Noel Essers with a difference of 2h10m. In the third place of the general is the IVECO of Belgian Igor Bouwens, 2h17m of the Portuguese trio. 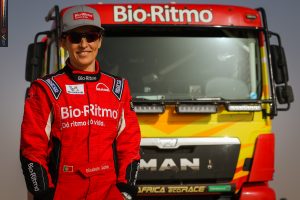 For Elisabete Jacinto this was another excellent journey: “today was a good day. It was a fast stage, but with a very difficult navigation. The road-book had several inaccuracies and very extensive notes that made things more difficult. We still had the crossings of three dunes, however, we managed to pass well. We did the whole stage with a good rhythm, very fast, and we ended up well classified. We couldn’t be happier with the today’s result“, said the Portuguese on the arrival at the camp in Chami, Mauritania. Today the Bio-Ritmo® team will have the added difficulty of having to work on the mechanics of the MAN TGS of competition without the aid of their assistance, since it is the first part of a marathon day that ends tomorrow.

The eighth stage of the Africa Race 2019 will be completed the second part of the marathon stage, which will be composed of a 445 kilometers selective sector. It will be one more day fulfilled in fast and sandy tracks but having traveled hundreds of miles without any mechanical help, the competitors will have to handle carefully with the mechanics because the last third of the route will be accomplished in several complex dunes.