Elisabete Jacinto gets closer to victory 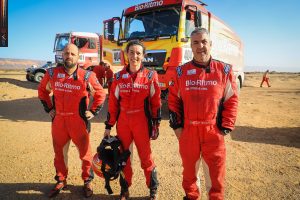 Elisabete Jacinto remains unstoppable at the Africa Eco Race 2019. In the ninth stage of this great African marathon, which took place today around Amojdar in Mauritania, the Portuguese reinforced the leadership among the trucks, widening the advantage that she has for the 2nd place, by having conquered the third place in her category. The Bio-Ritmo® team completed the special composed by 374.37-kilometer in 5h14m57s with a difference of only three minutes for the Czech Tomas Tomecek, who finished second among the T4. In the overall classification with cars, the Portuguese were in 8th place.

At a time when only are missing two legs to dispute, as the journey of the Lac Rose doesn’t enter at the final classification, the Portuguese trio remains firm in the top position of the truck category, having now extended the gap to the second place occupied by the Belgian Noel Essers, who now has a disadvantage of 2h12m for the Portuguese. In terms of the joint classification the Portuguese team retains the 6th place. 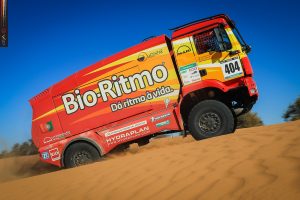 Elisabete Jacinto, José Marques and Marco Cochinho are getting closer to obtain a victory in the eleventh edition of the Africa Eco Race: “today the special was particularly hard. We did more than 100 kilometers in dunes, which was difficult. We were capable of pass them well, but at some more complicated points we got stuck and lost some time. The navigation was also very complicated. But overall the stage went relatively well because, where we could, we went very fast and had no mechanical problems. We are happy because there are only two stages left to finish the race and the results are excellent“, revealed the Portuguese driver, naturally satisfied with her classification.

Tomorrow will be the 10th stage of the Africa Race. According to René Metge, in 2018 this same day was the most difficult of all since the creation of this competition. The special will be fulfilled between Amojar a Akjout and will count on a selective sector of 471,58 kilometers. On the arrival at the camp, which will be installed near the town of Akjoujt, the participants of this edition of the Africa Race will deliver several donations to the municipality.