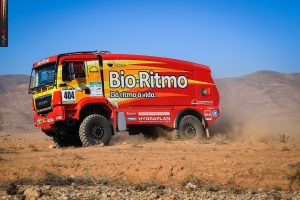 Elisabete Jacinto reached the second position among the trucks in the first special of the Africa Eco Race 2019, a short 90-kilometer journey held between Ameziane and Merada, in Morocco. The Bio-Ritmo® team also attained the fourth place in the joint auto/truck classification, finishing the selective sector with a difference of only 1m34s for the first overall competitor, and took 1h01m20s to complete the course of the day.

The trio composed by Elisabete Jacinto, José Marques and Marco Cochinho completed the first day of this great African marathon without any difficulties imposing a good performance against their most direct opponents and finished ahead of the Czech Tatra Tomas Tomecek, the great opponent of the Portuguese in this race. Now, the Bio-Ritmo® team is only 1m23s away from the first place of the truck category, that is occupied by the Belgian Igor Bouwens who competes with an IVECO.

For Elisabete Jacinto, this was a very positive way to start the competition: “the special was difficult in terms of navigation. But we did all very well without making mistakes and we managed to impose a good rhythm. We won several places in relation to the competitors that left before us and in the end, we reached a good position. The start for the stage was delayed because Morocco changed the entry system in the country. So, we had to carry out the formalities twice, one on the boat and the other as soon as we reached the port, which greatly delayed the competition. However, it all went well, and we are happy with this first day of racing” said Elisabete Jacinto at the end of the first stage of the Africa Eco Race 2019.

The second stage of the Africa Race 2019 will have a debut track and marks the beginning of a rally that promises to be quite interesting. Experienced navigators will have no problems during the special, but they will have to be vigilant to avoid the dangers of the Moroccan tracks. The arrival will be made in the camp where the teams will be able to enjoy the maximum of rest.